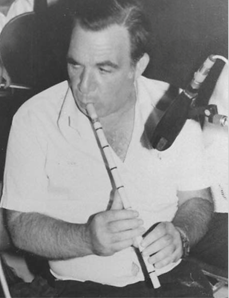 Elias was a virtuoso nay player, composer and instrument maker. In Baghdad Elias studied law as well as the nay with a Syrian teacher. He played with some of the greatest stars of Iraqi music, including Nazem al-Ghazali, Salima Morad, Muhammed al-Kubanchi, and the brothers Salah and Daoud al-Kuwaiti. He joined the Baghdad Radio Orchestra in 1947. Elias specialized in both Iraqi maqam and the more widespread Egyptian style of tarab music, which he greatly enjoyed. He also studied law for two years, but had to quit his studies upon immigrating to Israel in 1951. In Israel he became a member of the Israel Broadcast Authority’s Oriental orchestra for which he also composed hundreds of works. After the orchestra was disbanded in 1992, Elias continued to play in private parties. Elias was the last living musicians to have played regularly with the Kuwaiti brothers, and he collaborated with Dudu Tassa, Daoud’s grandson, on his 2011 album, which was dedicated to their music.

An interview with Elias by Babylonian Jewry Heritage Center (Hebrew)

Elias builds and explains about the Nay. (Hebrew)

Elias tells about himself.

Iraqi composer and violinist, Salah El Kuweiti was born to Iraqi parents in Kuwait, and taken to Iraq when he was 17. He played violin, sang, composed, and achieved...

Rabbi David Menachem was born in 1980 to a family who immigrated from Iraq in the 1950s. His maternal grandfather, Rabbi Gurje Yair, was an educator and one of the...