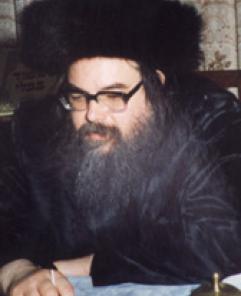 Admor is an acronym in Hebrew for "Adonenu, Morenu Ve-Rabenu" (our master, our teacher, our rabbi). It is a synonym to Tsadik, the leader of a Hassidic community, and to the Rebe (in Yiddish), pronounced Rebi by Habad Hassidim in Hebrew.

The Admor's leadership is different from the leadership of an ordinary rabbi. The rabbi is the religious leader of the community and his authority is expressed in matters connected to Jewish law (Hallakha). He conducts marriages, signs on divorces, and is the address for questions concerning Jewish practices, Kosher problems, and questions pertaining the proper way of conduct. The rabbi makes a "Psak Halakha" (decides on a new religious rule), and his community follows it. Of course, there is not always a consensus in religious matters. A rabbi can forbid, allow, aggravate, or lighten his rules, and each Jew may choose his own rabbi accordingly. The rabbi of a Yeshiva (Jewish-religious school) is also a teacher and deals with education.

The authority of the Hassidic Admor, on the other hand, comes from his being a charismatic social leader, and a scion of a dynasty of Tsadikim (righteous men), who led communities of Hassidim for generations. Most importantly, he receives his authority from the place of the Tsadik in the Hassidic tradition. One of the fundaments of the Hassidism is the belief in a Tsadik, who is a unique person, a leader, who by his worship, Dvekut, and Hassidic way, gains spiritual transcendence. This links his soul to God, and gives him spiritual and supernatural powers, with which he acts in the higher world. This way, the Tsadik can mediate between the godly world and the material world. The Hassid is commanded to be connected to the Tsadik and believe in him in order to be provided with the Tsadik's goodness, on both spiritual and material levels.

In the geographic conditions of Eastern Europe, the pilgrimage to the Tsadik was, as determined by the Tsadikim themselves, a rewarding act by its own virtue. For example, according to rabbi Nahman of Breslau, the Hassid "gets paid for the travel," and rabbi Shlomo of Karlin, is ascribed as saying, "in the truth world, the forests and fields which are traveled through to the Tsadik, are weighed in favor of the traveler."[1] Wealthy Hassidim used to travel to the Tsadik more often, while others tried going at least once a year. The popular times to travel to the Tsadik were before Rosh-Hashana, Yom Kippur, and Shavu'ot. The custom of visiting the grave of rabbi Nahman in Umman by Breslau Hassidim is the result of this tradition (they believe that rabbi Nahman does not have a successor, and hence they consider him to be the only Admor) and the testament left by rabbi Nahman for his Hassidim. Prior to the opening of Russia to the west, Breslau Hassidim used to go to Jerusalem on Rosh-Hashana Eve, and pray together in the central synagogue of Me'ah She'arim.

In return for his duties to his rabbi, the Hassid expects to "receive a blessing". In the popular meaning, this is a specific blessing for something the Hassid needs in a particular moment: good livelihood, successful matchmaking, recovery of a sick person, etc. However, the Hassid also turns to his rabbi for personal and spiritual guidance in all aspects of life;[2] faith issues, education of the children, matrimonial affairs, and even the changing of a house or a profession, are all brought for counsel before the rabbi. In earlier times any Hassid could turn to the rabbi at a specified day and hour. Today, however, it is customary to turn to the rabbi through one of his Gabaim (also known as "Meshamesh"). The request is usually transferred to the rabbi in writing, on a "Kvitl" (Eng. "note"). In special cases the Hassid may ask to see the rabbi in person, and ask his request "Beyehidut" (Heb. "in private"), as it is called by Habbad Hassidim, for whom this custom is common. Hassidim who live in the city of the rabbi, visit every public feast (Tish; see: Tish) held by him. During festivities, such as weddings in the rabbi's family, all of his Hassidim align in one file and shake his hand one by one. In some places, they even kiss the rabbi's hand.

Different Admors take on different tasks in their community. Some see the education of the young generation to be a personal mission of theirs. This is common with the Admors of the Gur dynasty. The Admors of Vishnits, in order to emphasize the importance of study, participate in the graduation parties of the students of the Heder and of the Yeshiva. Rabbi Hayim Me'ir of Vishnits, who immigrated to Israel after the 1948 Arab-Israeli war, and initiated the building of "Shikon Vishnits" in Bnei Brak, which later became "Kiryat Vishnits- the center of the Vishnits Hassidut in Israel," used to sit with the Yeshiva students in their Sabbath meals, and sing Zemirot  with them. He also took the job of renewing the musical tradition of the dynasty, and acted as a musical leader[3]. His son and successor was not as dominant as he was, but also took part in musical decisions, for example, choices of repertoire selections and participation of the choir in certain events. In Kiryat Vishnit's sister dynasty, Seret-Vishnits in Haifa, the Admor has influence on maintaining the musical tradition of the community and its development. Other Admors suffice themselves with partial or full direction of the singing at the Tish (See: Tish, and Mazor 1989). Lately, the tradition of the Admor playing the violin, maintained for several generations by the Krechnif dynasty and its branches, has come to our knowledge.

Tsamaa Lekha Nafshi, recording of a Habad Niggun attributed to the Admor Shneur Zalman of Liady, the founder of Habad. NSA Y05838.