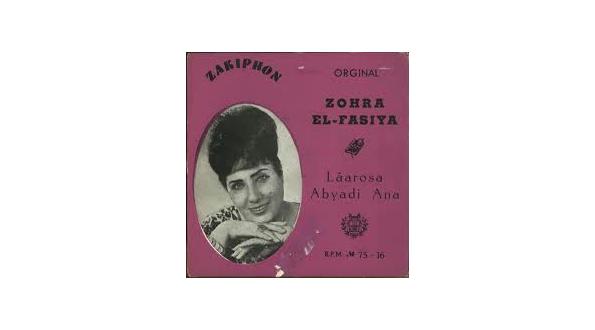 Abyadi Ana, a traditional Moroccan song for the Henna (Arabic (حِنَّاء ‎ceremony is our song for this month. The Henna is performed prior to the wedding ceremony (usually on the day before) in Jewish communities throughout the Middle East and North Africa. At the center of the ceremony stands the ritual application of henna paste on the skin of the bride (usually hands, in some communities also on the feet). In some communities the painting takes the form of complex traditional patterns draw by expert women. Nowadays, grooms’ hands are also painted with henna. In the past this elaborate ritual span over an entire day and in some communities such as Yemen even longer. The ceremony is accompanied by singing and instrumental accompaniment. Some of the most complex Henna ceremonies among Jews took place in Morocco where a special repertoire of traditional Henna songs developed, including Abyadi Ana. In Israel today, the Henna ceremony remains very popular, and is performed also by Jews from areas that did not have a Henna tradition before immigration to Israel. The proliferation of this ceremony nowadays in Israel created a genuine “Henna industry.” Professional companies are hired by the families of the bride and groom to produce Henna parties that include traditional costumes, authentic “ethnic” dishes and drinks, as well as skilled musicians who perform traditional henna songs.[1]

Mentions of henna ceremonies in relation to weddings are already found in the Bronze Era and they permeated to all cultures in the geographical areas where the henna plant grows. Rooted in ancient history, these ceremonies are linked to the unique healing and protective qualities ascribed to the ointment made out of the henna plant, and to its function as ornamentation because of the deep red color that remains after spreading it on the skin. 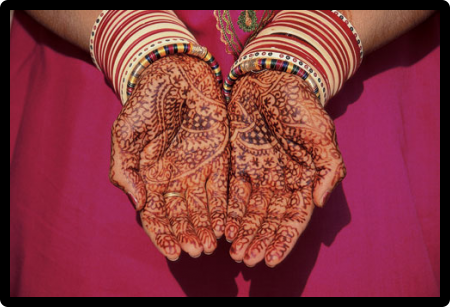 The Jews of Morocco share patterns of the Henna ceremony with their co-territorial Berber and Muslim neighbors.[2] The Henna rituals are considered to be among the central events of the Jewish traditional wedding that spans over several days and include the ritual bath, the exhibition of the dowry, exchanges of presents between the families, and finally the wedding ceremony itself (known as huppah, lit. canopy or kiddushin, lit. blessing) followed by the seven blessings (sheva’ berakhot) and the public reading of the ketubbah (marital contract) which seals the marriage of the young couple.

There are three Jewish Henna rituals in Morocco, called the azmomeg, the small Henna ritual and the big Henna ritual. These ceremonies are all held at the home of the bride and conducted by the women of the bride’s family. They differ in their volume and length.[3] During these ceremonies, the bride and groom wear traditional clothes (Kaftan). The bride’s mother and friends paint on the soon-to-be newlyweds’ hands with the Henna paste, while songs and dances are performed to cheer the young couple.

Abyadi Ana is one of the songs that can be heard in many Henna celebrations of Moroccan Jews until the present. The song is in the Judeo-Arabic dialect of the Jews of Morocco. This is an example of part of the song performed during a Henna ritual (watch video from 00:27:40).

According to Yossef Chetrit, one of the leading scholars in the field of Judeo-Arabic song in North Africa, the song was probably written at the beginning of the twentieth century, in one of the main Jewish communities of western Algeria, Tlemcen or Oran (Waharan), and spread quickly among the Jewish communities in Morocco. Chetrit claims that according to the first strophe, one can assume that the song was meant to be performed at the wedding night or in the morning after, together with the display of the proof of virginity, as part of the Tsabach ritual. As this ritual declined, the song was performed in all of the ceremonies comprising the wedding’s cycle. Due to its wide distribution via commercial recordings by popular artists (records and later on cassettes), Abyadi Ana became the most recognized wedding song in urban Jewish communities in Morocco, and later among Moroccan Jews immigrants in Israel.[4]

Abyadi Ana is part of the musical repertoire sung by Moroccan Jewish women to accompany wedding ceremonies. The lyrics of these songs usually refer to the event in which they are performed, as we shall see in the example of Abyadi Ana. There are two known versions of this song, one from Meknes in Northern Morocco and the other from the Jewish community of Rabat, Morocco’s capital city.

The song begins by praising the Tsabach ritual mentioned earlier; displaying the virginity blood of the new bride is performed to ensure her family's respectability, therefore causing the enemies who hoped the bride's virginity would not be found to be ashamed and embarrassed (verse 1). Next there are implications to other wedding rituals, such as spreading the Henna onto the bride's hands (verse 2), preparing the bride as she sets off to the home of the groom (verse 5), and the Qiddushin ceremony (verse 6). The song also praises the bride (verse 8). The final phrase is a request directed towards the groom, asking him to take care of his original family even if his new wife will now be at the center of his concerns (verses 10-11).

The text of the song does not have a systematic meter or rhyme; however, the melody provides a framework that divides the song into strophes. The song has six strophes and a chorus. Each strophe consists of two verses, each verse having two hemistiches. The melody consists of three sections (see transcription); the performances by different singers vary in the pattern of repetitions of these sections. 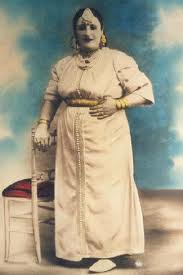 The recording of Abyadi Ana for this Song of the Month, is performed by the most famous Moroccan Jewish singer, Zohra El Fassia (1905-1994). Her public performances of Abyadi Ana in weddings of affluent Jews in Morocco and her recording were the main factors for the song’s wide circulation.

The heartbreaking life story of Zohra El Fassia can be defined as a tragedy of displacement.  Her relative anonymity in Israel during the last part of her life sharply contrasted with her status of a ‘legend’ in Morocco, an artist admired both by Muslims and Jews. Over the course of her career, El Fassia was assigned the role of court singer during the reign of Mohammed V (roughly the first half of the 20th century). She was the first Moroccan woman to write, compose and perform songs, and the first one to record commercially for companies such as ‘Colombia Records’, ‘Gramophone Company’, ’Pathé Marconi’ and ‘Philips Records’.[5] Her influence on Moroccan music, especially on the malhun genre, is widely acknowledged in Morocco, but her musical repertoire included many other genres such as the sha’abi, gharnati, djiri and hawzi (all genres related to the Andalusian music from Algeria) as well as modern popular songs. El Fassia’s important role in the development of Moroccan music was evident in the posthumous tribute organized in her honor in 2009 during the Sixth Annual Festival of the Atlantic Andalusias, held in the southern Moroccan port of Essaouira.[6]

In the early 1960s, at the height of her career in Morocco, El Fassia immigrated to Israel and settled in the southern port of Ashkelon, in conditions very different from the ones she enjoyed in Morocco.[7] One of the most touching Israeli writings about her is a poem written by the Israeli poet of Moroccan origin Erez Biton, which describes the tragic downfall of the musician after she moved to Israel.

singer at Muhammad the Fifth’s court in Rabat, Morocco

they say when she sang

to clear a path through the crowd

to reach the hem of her skirt

to kiss the tips of her toes

now you can find her in Ashkelon

[in the quarter] Antiquities 3

by the welfare office the smell

of leftover sardine cans on a wobbly three-legged table

the stunning royal carpets stained on the Jewish Agency cot

spending hours in a bathrobe

In front of the mirror

Apple of our eyes

You don't really get it at first

Her heart is clear

her eyes are full of love

The complex cultural, social and economic picture depicted in this poem reflects the difficulties faced by many of the new immigrants from the Maghreb in Israel, especially the tragic experience of artists who did not find in their new country the expected public and institutional recognition.

During her first years in Israel, Zohra El Fassia was still able to record for the local record company Koliphon in Tel Aviv-Jaffa. This pioneer company was founded and is still owned by the Azoulay Brothers, themselves entrepreneurs who arrived to Israel a few years before El Fassia.  In her recorded version the structure of Abyadi Ana is AABBCBBC; A and B represent the strophes while C is the refrain. The orchestra usually repeats each melodic section after the singer.

Other recorded versions of Abyadi Ana 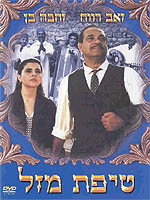 Our next example of a recording of Abyadi Ana appears in the soundtrack of the Israeli feature movie Tipat mazal (A Bit of Luck), which addresses the difficulties of North African immigrants to Israel such as Zohra El Fassia. The movie, directed by Zeev Revach and released in 1994, tells the story of Jojo Ben Shushan (Zeev Revach), a successful Moroccan Jewish singer who immigrates to Israel in the 1950s together with his daughter. Apart from the difficulties the two are forced to face, Jojo becomes ill, needing an expensive surgery in Paris. With the help of an old friend from Morocco, Jojo and his daughter Vivi, starred by a famous Israeli singer Zehava Ben, manage to pay a trip to Paris where Jojo is cured.

In the movie, Abyadi Ana is performed by Jojo (Zeev Revach) during a Henna ceremony, accompanied by an ensemble of musicians. This version is a bit different from the one by El Fassia, and its overall form is ABCBCC. The fact that Abyadi Ana is one of the few songs performed during the henna scene in the film is an indication for its sustained popularity among Moroccan Jews in Israel in the 1990s. 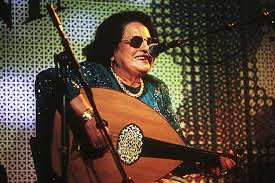 Our next example of Abyadi Ana is performed by the famous Jewish Algerian singer Reinette l’Oranaise.[9] Reinette’s version differs substantially from the two Moroccan (El Fassia and Revach). The melodic contour is different (but the ending cadences of the sections and their divisions are identical), the tempo is slower, the beat is more loose or flexible, there are variants in the text and the overall structure is ABCBˡC. The orchestra repeats each section after the singer.

* The picture of Zohra El Fassia's record cover was taken by Michal Avidor.

[1] Rachel Hoffman-Halevy, “Stretch Forth Your Hand to the Henna”: Yemenite Music in Israel as Reflected in the Contemporary Henna Ceremony. Ph.D. diss., The Hebrew University of Jerusalem, 2011. (In Hebrew, English summary).