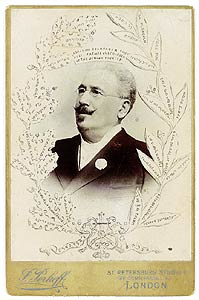 Yiddish poet, dramatist, and composer; father of the Yiddish theater
1840-1908

Abraham Goldfaden, known as the father of the Yiddish theater, was born in Staro Konstantinov, Ukraine. In order to avoid the draft, Golfaden’s father took advantage of a new law mandating that Jewish students attending public school would be except from army service. Goldfaden then went on to study at a rabbinical seminary in Zhitomir, Ukraine, where he began writing poems, songs, ballads, and was involved in purimshpil theatrical productions. While working as a teacher, Goldfaden published a collection of early Hebrew poems in 1862 in Ha-Meliz, and several of his Yiddish poems in Kol Mevasser, shortly thereafter. In 1865 he published his first booklet of Hebrew songs, Zizim u-Ferahim, and in 1965 an additional booklet of Yiddish songs, Dos Yudele. In 1875, he left his teaching post and moved to Lemberg where he began publishing a satirical journal, Yisrolec for the Jewish community living there.  The journal was in circulation for approximately six months before the Russian government banned its continued publication.

Goldfaden moved on to Jassy, Rumania where he came in contact with the Broder Singers, who were active in Yiddish folk song performance. It was there that Goldfaden began to develop theatrical dialogue to accompany his songs, as well as other popular Jewish and secular music. The initial performances of these musical theater pieces created movement to establish a professional Yiddish theater. These early productions met with overwhelming praise and support from critics and viewers alike. Goldfaden slowly began building a cast of performers, recruiting actors, singers, cantors, and wandering minstrels to be involved in the fledgling Yiddish theater. By 1880, his troupe was touring extensively throughout Russia, which increased his recognition as well as the production of new young composers of Yiddish songs and librettos for the theater. The Yiddish theater continued to grow in scope until 1883 when the Russian government banned performances in Yiddish. As a result of this new order, many Jewish authors and composers immigrated to other countries in order to continue their work and consequently Yiddish theaters were established in Paris, London, and New York.

In 1887, Goldfaden moved to New York, but returned after only a short while to Europe where he produced his plays in London, Paris, and Lemberg theaters. The most successful of Goldfaden’s early plays were satirical pieces with stereotypical characters such as Shmendrik (1877), Der Fanatik oder di Tsvey Kuni Lemels (1880) and Les precieuses ridicules. The early 1880’s marked a shift in Goldfaden’s thematic and lyric style, as he began writing more serious dramas, including Shulamit (1880), The Doctor Almosado (1882) and finally Bar Kochba (1883).

Although Goldfaden had no formal musical education, he arranged the majority of the music for his plays. Goldfaden’s corpus was very eclectic; he drew from a wide range of sources including synagogue melodies, Jewish folksongs, Eastern European folk and popular music, and Italian and French opera arias. Many of the songs arranged for his plays were originally folk songs, and gained even greater popularity after their use on the stage. Perhaps the best example of this is the song Roshinkes mit Mandlen, which won wide recognition after its adaptation for the play Shulamit. Goldfaden successfully blended Jewish musical elements and themes with simple storylines and European musical theater and operatic forms, to create a theatrical style that was easily accessible to a wide audience. In response to growing anti-Semitism, Goldfaden returned to New York in 1903, where he spent the last five years of his life involved in promoting the growing culture of Yiddish literature and theater.

Click here to view the online exhibit: “Abraham Goldfaden: A Centennial Tribute,” prepared by Eva Heinstein with help from the JMRC staff.

Zvi Idelsohn's Obituary of Abraham Goldfaden, Translated and Annotated, with a Commentary by James Loeffler, Edwin Seroussi and Yonatan Turgeman.

Abraham Goldfaden, known as the father of the Yiddish theater, was born in Staro Konstantinov, Ukraine. In order to avoid the draft, Golfaden’s father took advantage of a new law mandating that...