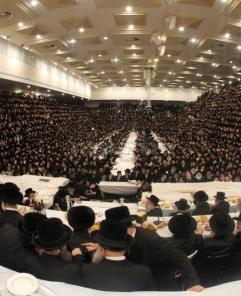 In Yiddish, Tish means table. In the Hasidic movement, the Tish is the public feast of the rabbi (see: Admor), held with a large crowd. During the feast, the rabbi and/or his Hasidim, sing niggunim, Zemirot, or various texts related to the event.

However, the main reason of the Hasidim to participate in the Tish is the sermon of the rabbi, the "Torah." The giving of a Torah sermon during a feast is not a Hasidic invention. Since the Mishna era, rabbis and other leading Jewish figures used to give a Torah sermon during the feast, and this custom was maintained throughout the generations. Nevertheless, the Hasidic movement gave the Tish a dimension of significance and holiness that was absent from the feasts of Jewish sages in previous generations.

This dimension stems from the Hasidic belief that during the Tish, all the actions of the Tsadik (see: Admor), like slicing the halah (bread for Sabbath and holidays) or pouring wine, are charged with a mystical aspect, for the Tsadik worships the Lord through earthly as well as spiritual actions. Put differently, the Tsadik worships the Lord not only through prayer but also through everyday actions that he does with intention and mystical unification (Heb. "Kavanot ve-Yihudim"). These virtues are sometimes attached to the Tsadik's singing and dancing at the Tish and even to rhythmic movements and handclaps, with which he accompanies the niggunim. In these cases, the crowd follows the rabbi attentively, and reacts appropriately (see below).

Times for the Tish

The times in which the Tish is held vary with the different dynasties. An Admor  can change the tradition of the dynasty and decrease the frequency of public feasts because of his health, old age, or other reasons.

Generally, the Tish is held on Sabbath eves and holidays, and more rarely at daily meals and the "Melaveh Malka" meal at the conclusion of the Sabbath. A Tish that holds particular significance and a special atmosphere is held on the third meal of the Sabbath. The Tish is also held on Hannukah, Tu Bishvat, Purim, and Lag Ba'omer. In Hannukah, Hol Hamo'ed of Sukkot and Passover there is usually only one or two Tishn, but many Admorim usually perform a public lighting of the Hannukah candles during the eight days of the holidays. "Yorzayt-Tish" is held on memorial days of prominent Admorim of the dynasty. Some dynasties hold a Tish on special dates, such as the dates on which the Lubavitch Admorim were freed from the Russian Tsar’s jail, on the 19th of Kislev, and 12th of Tamuz. One Tish worthy of note is the one held in several dynasties on the noon of Yom-Kippur eve.

Structure of the Tish

The structure of the Tish, including its texts and Niggunim, may vary with the different dynasties. Some dynasties will sing more at every Tish (like Vizhnits), and some less at a specific Tish (such as the Yorzayt-Tish that was held in Boyan in 1987, as a memorial to one of the Tsadikim).

In several dynasties, the Tish of Sabbath eve is divided into two parts. The second part, following the "Birkat Hamazon" (Grace after Meals), is called "Zveyter Tish" (second Tish), or "Fruit Tish," due to the custom of eating fruits at that part of the Tish; its structure is more flexible than the first. On the other hand, the name "Fruit Tish" may be given to any Tish in which the  "Hamotsi" (i.e. the blessing on the bread) and "Birkat Hamazon"blessings are not said. Another unique phenomenon worthy of note is the singing of texts taken from Rosh Hashana (Jewish New Year) prayer during the Tish of Tu-Bishvat, because this holiday is also known as the New Year of the Trees.

The Tish is usually conducted by the Admor, even when its structure is fixed. The congregation participates in the meal only symbolically by receiving a piece of Halah for the "Hamotsi" blessing, the Shirayim (leftovers of the fish or other dishes, after the Admor partook of them), and\or fruit or wine.

The Admor also directs the singing of the Tish, whether it is he himself who begins each song, or by giving out "Kibbudim" (treats): one Hasid is given "Yah Ribbon Olam," and another gets a different niggun. The rabbi of Boyan, for example, sets the order of the singing for the entire Tish in advance. He whispers in the ear of the Gabai who should get the next Niggun, and the Gabai motions to the chosen Hasid, or to the choir, to begin singing. In the dynasties of Vizhnits, Belz, and Boyan, the rabbi affects the singing by moving or clapping his hands, marking the tempo and orchestrating the degree of excitement[1] (as can be heard in the attached example).

Some Admorim precede the Torah sermon with a niggun that they hum to themselves. These Niggunim are called "Niggunim prior to the Torah."

In many dynasties the Tish is concluded with a dance, however, in some, this is done only on special occasions.

See also Tish-nign in the Lexicon of Klezmer Terminology (LKT).

From the JMRC Cd The Hasidic Niggun as Sung by the Hasidim.