Musical Traditions of the Ashkenazi Jews 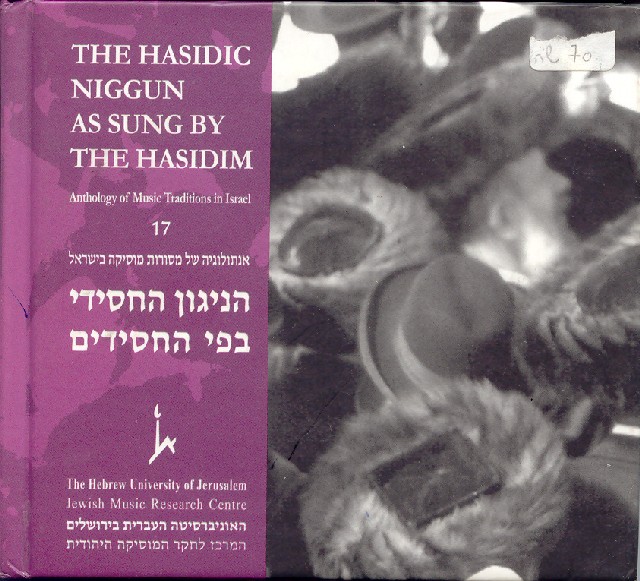 The oral and written documentation of all Hassidic musical traditions found in Israel has been one of the seminal projects of the JMRC since its inception. Researchers Yaakov Mazor and Andre Hajdu started to record live events at most Hassidic courts in Israel in the mid-1960s. This collection has grown constantly, enriched by large donations of private collections. Among the results of the research based on this rich documentation is the highly praised album, The Hassidic Niggun as Sung by the Hassidim. New aspects of the Hassidic niggun are constantly being added to the research agenda, such as its relation to the early Israeli folksong and to non-Hassidic Ashkenazi liturgical repertoires. Another major goal in Hassidic music research in the coming years (2013-2015) is the new scholarly edition of Volume 4 of Moshe Beregovski’s Jewish Folk Music dedicated to the Hassidic niggun edited with commentaries by Yaacov Mazor. Another major project in this field is carried by JMRC research associate Rafi Ben Moshe. It consists of the publication of a study of Habad contemplation (devekut) niggunim based on extensive field work.

Liturgical traditions of the Ashkenazi Jews

Several major projects related to diverse aspects of Ashkenazi liturgical traditions have been the focus of attention by JMRC researchers. The publication of the Maier Levi of Esslinger cantorial compendium edited by JMRC associate scholar Geoffrey Goldberg in association with Eliyahu Schleifer is one of the major efforts of the coming years (2013-2015). This mid-nineteenth century manuscript collection comprises thirteen manuscript volumes totaling over 1900 pages of musical notation. Eight of these volumes are located in the Eric Mandell Music Collection of Gratz College, Philadelphia, four are part of the Eduard Birnbaum Collection of Jewish Music of Hebrew Union College-Jewish Institute of Religion, Cincinnati (Mus. Add. 26, Vols. 1–4), and one, the latest discovery in a search that has lasted for over two decades, is located at the Stadt- und Universitäsbibliothek, Frankfurt, Germany, (Ms. hebr. oct 272; previously attributed wrongly to Abraham Baer). The Cincinnati volumes, comprising the bulk of the compendium, constitute a later addition to the Birnbaum Collection, having been incorporated sometime after the Second World War, which explains why they were unknown to earlier catalogers. The Gratz College manuscripts are broader in liturgical scope and have a more variegated melodic content. The publication of the Maier Levy collection will mark one of the most substantial additions in recent memory to our knowledge of the traditional Central European Jewish liturgy prior to the mid-nineteenth century.

Another major project in the area of Ashkenazi liturgical music is the publication of the manuscript collection titled “Kaul Jeoedoh” compiled in 1928 by B. M. Stern from the lore of J. I. Vleeschhouwer, chief cantor of the great synagogue in Groningen, Holland. This unique document of 172 pages contains the music for most of the liturgical cycle as it was performed in that synagogue in the late nineteenth century. The volume is being edited by Oded Peles under the supervision of Eliyahu Schleifer in collaboration with the Center for Research on Dutch Jewry at the Hebrew University of Jerusalem.

JMRC researchers have paid special attention to the Yiddish folksong, especially after the substantial collections of Moshe Beregovski from Kiev and Meir Noy from Tel Aviv were made available to scholars in the 1980s and 1990s at the NLI. At present there are two projects under way. The major one is the revised publication of Moshe Beregovski’s collection of Yiddish folksongs edited with annotations by Michael Lukin. This work was conceived as Volume II of Beregovsky’s five-volume anthology of Jewish music that remained unpublished until after his death. Unlike the other four volumes that were released posthumously in Russian editions, the majority of this volume has remained unpublished. A second project is the scholarly release of recordings by the late poet and stage performer Leibu Levin edited by Ruth Levin.