This film, narrated by Laurence Olivier, contains performances of both secular and religious music in Israel. This includes praying at the Western Wall, a Jazz version of the Song of Songs, an Upsherin (the ceremonial first haircut when a boy is three years old) ceremony with dancing and singing, and lighting of Hannuka candles in different traditions such as, Persian, Yemenite, and secular.
Material Type:
Films
Year:
1971
Author
Mark Slobin

Emphasizes the vastness of Jewish music in terms of time and place and therefore the impossibility of addressing it as a unified field.

Sabbath bride is a documentary film about Sabbath in London. It features prayers and music along with interviews and Sabbath food.

Excerpt from film that features singing of different pieces:

Additional excerpt from the film about Havdala:

This film documents different songs and musical styles in Israel during the 1970's. 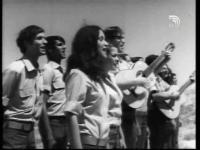 More information can be found at the National Center for Jewish Film at Brandeis University website.

The popular song Kol HaKavod from the film

This film shows and explains different Jewish customs. Among the customs shown are children singing the Shem'a over a babies cradle. That is a common custom in Poland and Ukraine. Additionally, there is a wedding ceremony of Eastern European Jews.

Film about the traditions and rituals of the Los Angeles Rhodeslis, the Jewish community who came from the island of Rhodes.

More information can be found at the National Center for Jewish Film at Brandeis University website.