Ten zemirot ‘ami is the second disc in the new “Contemporary Jewish Music” series of the Jewish Music Research Centre. This new series differs in character from the classic documentary series, “Anthology of Musical Traditions in Israel.” The discs do not aspire to compete with the proliferation of commercial recordings appearing under the label “Jewish music” in Israel and around the world. The main goal of the new series is to encourage experimental creativity drawing on Jewish sources—the same sources that the Centre labors to document, research and understand. In every living, breathing culture, every generation feels obligated to add something new to its capital. Composition of new melodies for piyyutim (liturgical poems), which had almost disappeared in the last generation, is a clear example of this type of undertaking. It sheds new light on ancient piyyutim that are still relevant to the community and can be brought back to life on the wings of the new melody. This is the guiding principle behind this publication.

The direct inspiration for this project is the excellent publication Mahzor Aram Zova: Order of prayers according to the costum of the Holy Congregation of Aram Zova (Aleppo/Haleb, Syria), a facsimile reproduction of the Venice edition of 5287/1527 printed in 5767/2007 by Yad Ha-Rav Nissim of Jerusalem, with the sponsorship of the Edmond J. Safra Foundation. This unique maḥzor contains many piyyutim composed by local poets and sung by the community during yearly and life cycle events.

Of the hundreds of piyyutim in the maḥzor, we chose twelve for which we commissioned new melodies. The work of composition was divided among ﬁve Israeli composers who are now involved in integrating the piyyut with the art of the Arabic maqam: R. David Menahem, Roni Ish-Ran, Yair Dalal, Elad Gabbai, and Elad Harel. Two paytanim active in Halabi synagogues in the United States joined the Israeli paytanim for performance of the piyyutim: David Shiro and Yehezkel Zion. 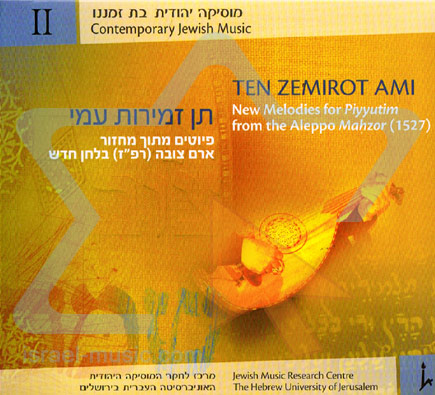 This piyyut for Simḥat Torah appears in the maḥzor after the service and Torah reading for that holiday. We readily recognize its opening—Mi-pi El, mi-pi El, titbarach Israel—from the well-known Simḥat Torah piyyut beginning Ein adir ka-Adonai, ein baruch ke-ben Amram (which does not appear in the maḥzor). Like other piyyutim that were originally written for Shavuot (Pentecost) but were also sung on Simḥat Torah, the topic is the giving of the Torah. Some ascribe it to R. Elazar ha-Bavli (13th century, Baghdad), but this attribution has not been conﬁrmed.

A piyyut for brit milah (circumcision) included in the section of seliḥot for the Sabbaths of the month of Elul. The author is apparently R. Shmuel Ha-Dayan ben Moshe of Aram Zova (c. 1150-1200). R. Shmuel was a proliﬁc poet, and several of his poems are of an exceptionally high level. We do not know whether the description dayan (religious judge) refers to a position he occupied, or whether he was the son of the well-known Dayan family of Aram Zova. The piyyut was written for a brit milah of a boy born into the community, as we learn from the last verse—“We welcome you, people of Aram Zova.”

Ten zemirot ‘ami is the second disc in the new “Contemporary Jewish Music” series of the Jewish Music Research Centre. This new series differs in...

A comparative survey of the music of the Jews in Syria and Turkey. Includes analysis of turkish and arab modal systems with examples from christian liturgy and arab songs.