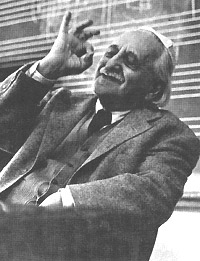 Solomon Rosowky, son of prominent cantor Baruch Leib Rosowsky, was born in in 1878. After completing his first degree in Law at the , Rosowsky went on to study music at the St. Petersburg Imperial Conservatory under teachers Rimski-Korsakov, Glazunov, and Lyadov, and studied conducting with Nikisch at the Leipzig Konservatorium. He helped to found the St. Petersburg Society for Jewish Folk Music in 1908 and served as the musical director of the .

In 1920, Rosowsky returned to where he worked as a music-critic and theater director, and established the first Jewish Conservatory of Music. Rosowsky immigrated to in 1925 and began working as a composer of incidental music for the Hebrew theater Ohel. Rosowsky, along with colleagues David Schor and David Mirenburg, established the Haganim Music Society in an attempt to continue the work of the St. Petersburg Society for Jewish Folk Music in Palestine. It was also during this time that Rosowsky began his influential research in the field of Biblical cantillation. Rosowsky received a teaching position at the Palestine Conservatory of Music in (now the Rubin Academy of Music) where he introduced new courses pertaining to his research of Biblical cantillation. In 1931, Rosowsky helped to found the America-Palestine Institute [Association] of Musical Sciences (known as Mailamm), an organization dedicated to supporting musical research in both countries.

Rosowsky worked alongside musicians and researchers Joseph Achron, Lazare Saminsky, Jacob Weinberg, and Joseph Yasser to promote new projects in Jewish music research. In 1947, Rosowsky moved to New York City to accept a teaching post at the New School for Social Research. Rosowsky later joined the faculty of the Jewish Theological Seminary of America where he became a leading scholar in the musicological study of Jewish Biblical cantillation.

Rosowsky’s seminal work, The Cantillation of the Bible: the Five Books of Moses, was published in 1957, providing an analytical theory of Biblical cantillation based on his research of the Lituanian-Israeli tradition. The massive work is broken up into three main sections: the first defines the basic functions of the 28 tropal signs; the second includes his field work results in musical notation; and the third delineates Rosowsky’s original theory of the Law of Assimilation (how tropes are joined) and includes an analysis of the scalar basis of Shabbat cantillation.