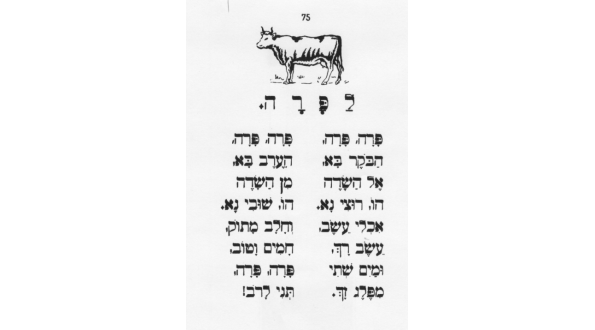 Our Song of the Month, Para Para , appeared on the JMRC’s release Cute Boy, Charming Girl (Anthology of Music Traditions in Israel, 23), a collection of Hebrew children's songs released in 2013. Barely three months passed after its release and the JMRC website began receiving updates regarding the liner notes to some of the songs. The first of these remarks came from Dr. Yosef Goldenberg from the Academy of Music and Dance in Jerusalem and the Department of Musicology of the Hebrew University who located a number of anthologies where Para Para was published that were overseen by the authors of the CD. Below are the results of Goldenberg's research that were expanded and written down by the JMRC’s website team.

It is uncertain who wrote the lyrics of Para Para and for this reason the song appeared in the CD Cute Boy, Charming Girl as being of “unknown author.” The version in the CD is one of few versions of Para Para recorded in field work by the JMRC researchers and now located at the National Sound Archives (NSA, Y 5887). It was performed by Miriam Cohen and recorded in kibbutz Afikim on May 15, 1991. The text of this version consists of three couplets, each containing two rhyming lines as follows:

As we know now, the song was first published in 1914 in Haim Aaron Kaplan's book Dikduk Halashon Ha'ivrit U'Shimusha (The Grammar of the Hebrew Language and its Uses). This version is very similar to that featured on our recording. In Kaplan's book however, the text is presented as part of an exercise to practice guttural Hebrew letters rather than as an autonomous song. Below is a facsimile of the song as published in a later edition of Kaplan’s book from 1926: 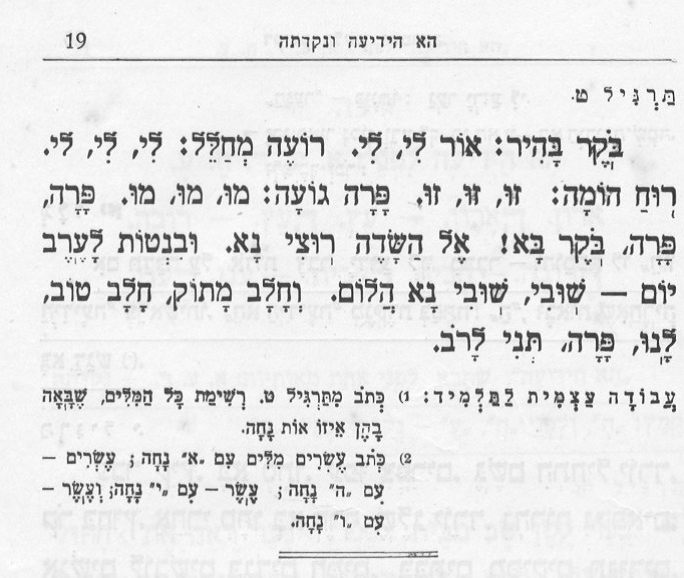 Haim Aharon Kaplan was the principal of a Warsaw Hebrew school. In 1933, he began keeping a journal in Hebrew that turned out to be a rare piece of documentation of that period. He continued his journal throughout World War II, until he was assassinated by the Nazis in 1942. After the war his journal was recovered in its entirety, was published in Hebrew, and was later translated and published in English (See:  Scroll of agony; the Warsaw diary of Chaim A. Kaplan. Translated and Edited by Abraham Isaac Katsh. New York: Macmillan, 1965.) We cannot determine if Kaplan is the author of the song, or if he is just quoting existing couplets that were perhaps know by the children as a pedagogical tool.

The song was published again in 1917, this time in Boston, in the book Shaharit: Sefer Limud Halashon Ha'ivrit L’shana Harishona (Shaharit: First Year Textbook for Learning the Hebrew Language). In this book's introduction, the authors note that the stories used were at a beginner's level, written in an easy flowing style, and conveyed a spirit of childhood. Most of the materials in this book, including the songs and the illustrations, were original and written specifically for the book.  In addition, the editors pointed out that one of the book's purposes was to become a gateway leading to biblical studies. They therefore added a few biblical stories that were adapted to a child's level.

Although most of the material in the book was new, a few of the songs originated in previous textbooks and anthologies. The table of contents, located at the end of the book, references the sources from which the songs and stories were taken. There it says that Para Para, which is referred to as Parateinu (“Our Cow”), was written by the Hebrew teacher, poet and dramatist Itzhak Katznelson (1886-1944) who, as Haim Aharon Kaplan, perished in the Holocaust. However, the song does not appear in Katznelson's famous anthology of children rhymes Gan Yeladim (Kindergarden, published in 1918). For this reason it is still premature to attribute Para Para to Katzenelson. The book's final pages feature musical notations to some of the songs that appeared in the book, but not for Parateinu. 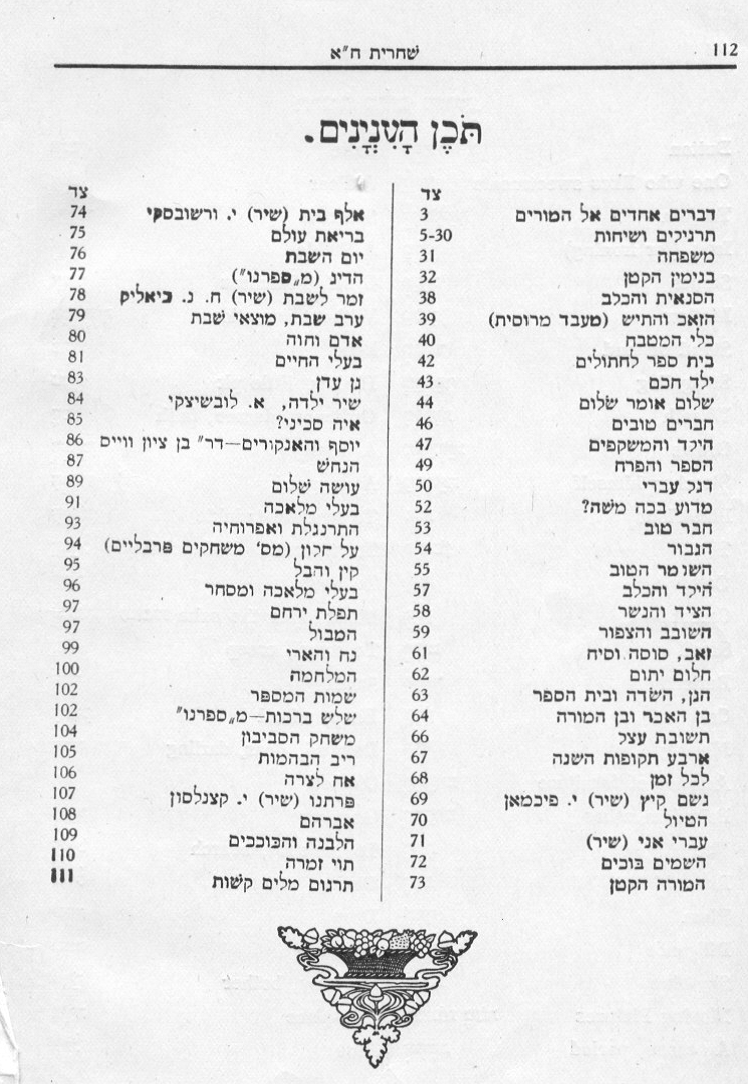 The song was published again in 1937 in a book called Sifrenu (Our Book). In this publication the name of the song's author is not mentioned neither is a notation of the melody provided. This is a slightly expanded version of the text, with four, instead of three couplets. New literary motifs are added: the speaker in the poem calls the cow to eat  soft pastures and to drink water from a crystal-clear creek. It is not clear if the melody was even known to the editors when the song was added to the book; it is possible that they added it on the basis of one of the earlier sources. 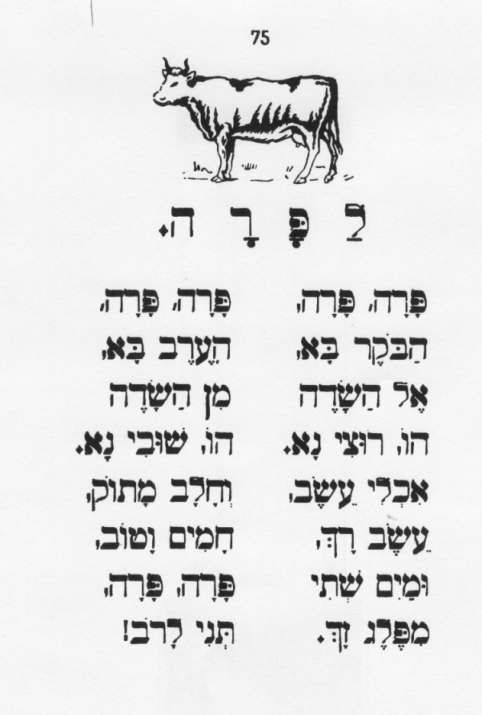 After 1943 the song also appears surprisingly in anthologies published by the Department of Education of the Chabad Center in Brooklyn, New York.

The tune of Para Para

Miriam Cohen learned her version of Para Para in the 1920s. The melody consists of three melodic phrases in triple meter, in the form ABBˡ. Each melodic phrase, comprised of a couplet, consists of a six-bar motif that repeats itself twice. Cohen performs the song in syncopated rhythm, which gives it a swing feeling. 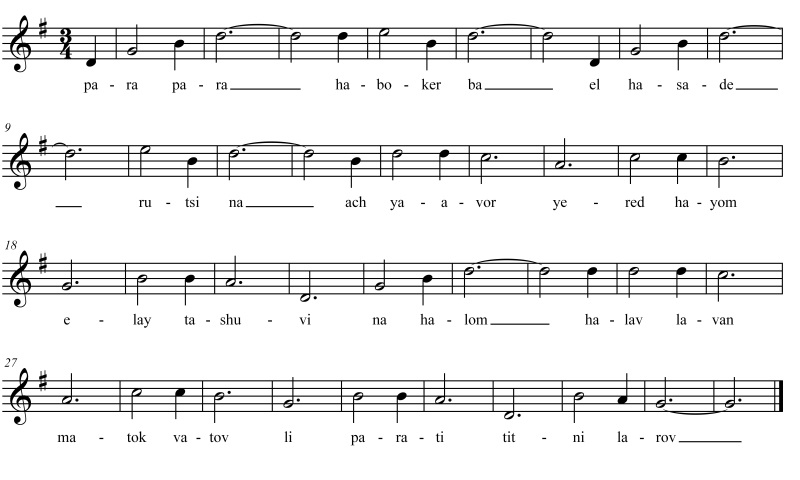 An additional melody for Para Para was composed by Ephraim Abileah (1881-1953). This version was titled Zemer Laparah (A Song to the Cow) and was found in the composer's manuscript of his collection of folk songs that is now located at the Abileah Archive at the Department of Music of the National Library in Jerusalem. The melody of Para Para by Abileah is substantially different in character than Cohen’s recorded version. The melody here is in, E minor, in double meter with in a rapid rhythmic movement  in eight notes, and finally, it is designed for choral singing in three voices: 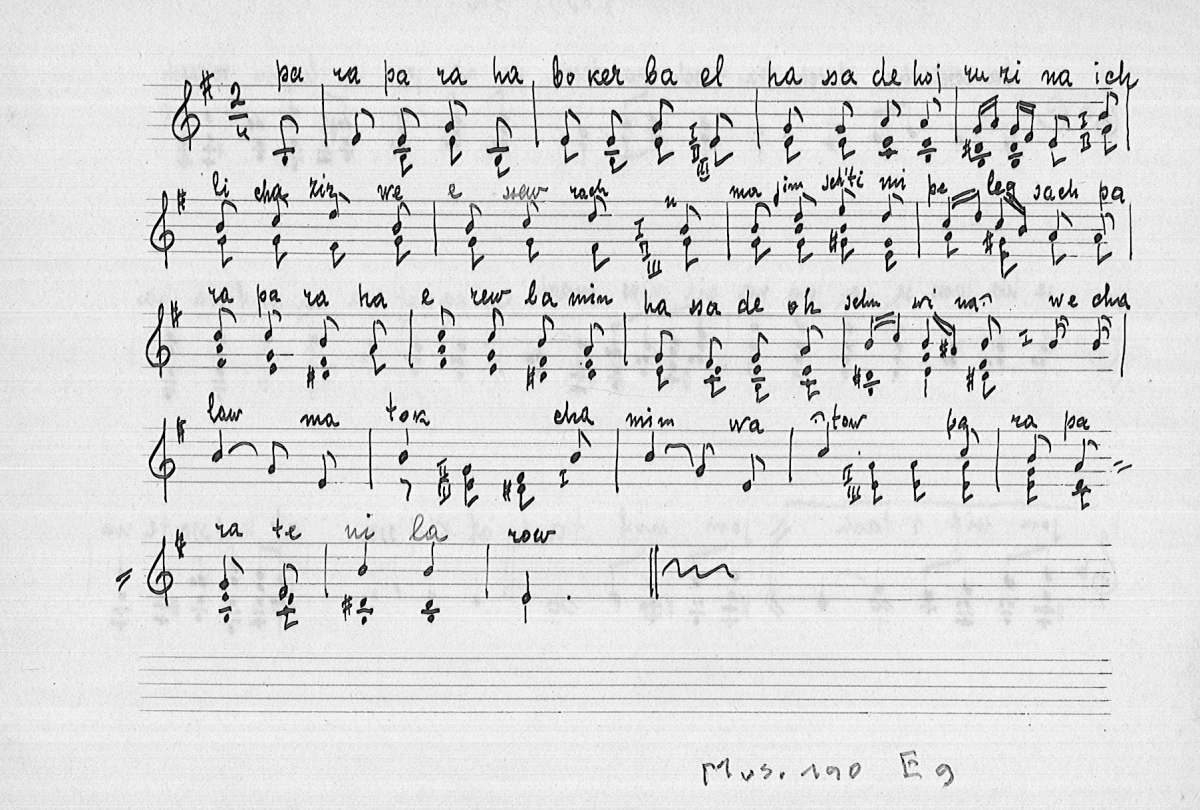 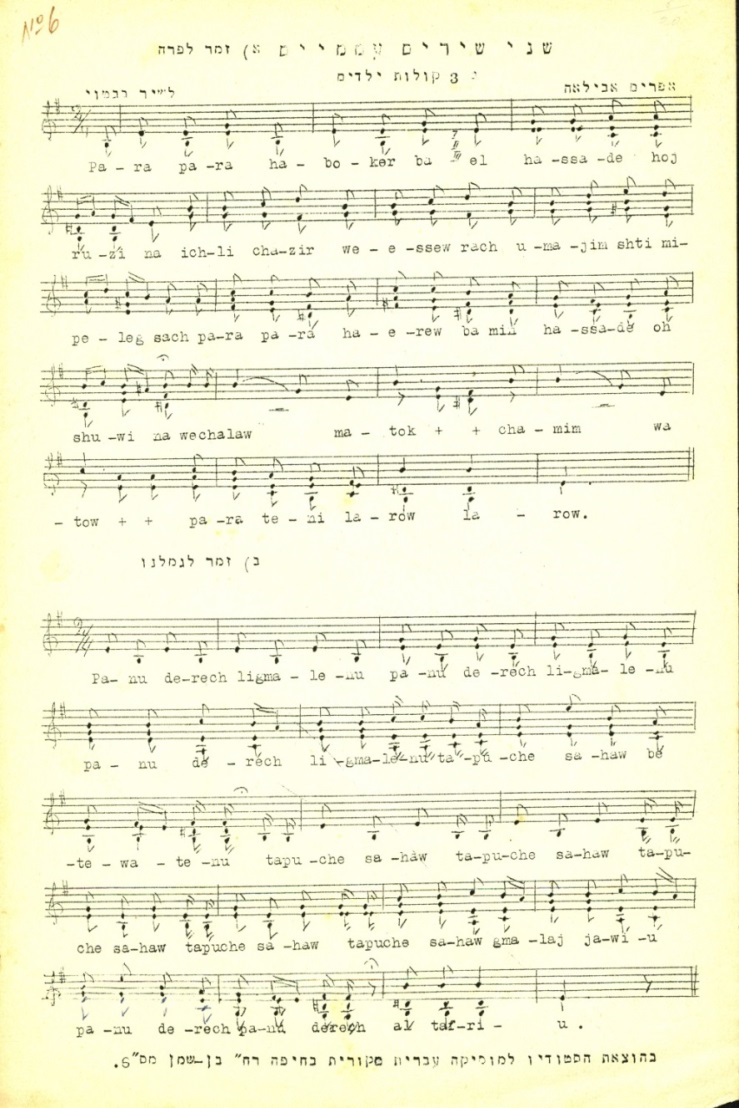 Ruthie Fried from Kibbutz Ma'anit knows an additional melody for Para Para that she learned from her mother in the 1940s. Although the origins of this melody are also unknown, it has definite European traits. Fried’s version is more similar to Cohen’s in mode (major) and meter (triple).

Para Para in a Literary Context

In addition to its uses as a didactic tool for the study of the Hebrew language, Para Para appears quoted in literary contexts. One particular example of quotation appears in Haim Be'er's poem Medinah Baderekh (Country on its Way), which was published in the journal Moznayim in 1982. This ant-war poem refers critically to the Lebanon War of 1982. It was republished in Moznayim in 1988 as part of a special volume dedicated to Hebrew poetry. The cow is first mentioned in the fourth and last part of this poem as an impure sacrifice to repent for the sins of war (“the corpse of the cow/ completely rises skywards”). Para Para is then quoted verbatim at the very end of the poem introduced by the poet as an ironic kinah (“lament”, “dirge”). Below follows a facsimile of Be'er's poem as it appeared in 1982: 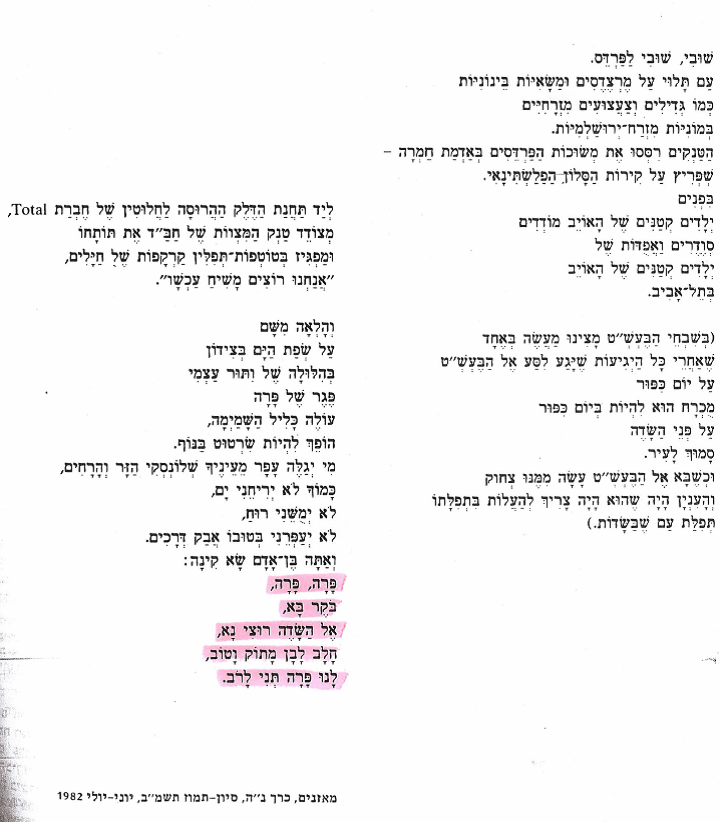 Para Para performed by Miriam Cohen and recorded in kibbutz Afikim on May 15, 1991.