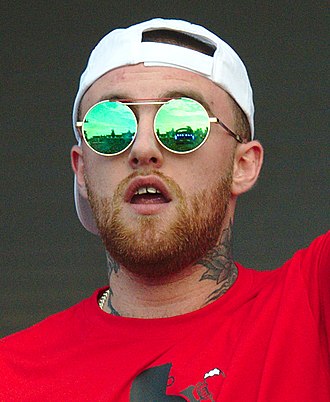 Malcolm James McCormick known professionally as Mac Miller. He was born to a Jewish mother and a Christian father. Miller was raised Jewish, had a Bar Mitzvah, and observed the Jewish High Holy Days. He described himself as “the coolest Jewish rapper”.1

Miller began his career in Pittsburgh's hip hop scene in 2007, at the age of fifteen. In 2010, he signed a record deal with independent label Rostrum Records and released his breakthrough mixtapes K.I.D.S. (2010) and Best Day Ever (2011). Miller's debut studio album, Blue Slide Park (2011), became the first independently distributed debut album to top the US Billboard 200 since 1995.

In 2013, he founded the record label imprint REMember Music. After his second studio album, Watching Movies with the Sound Off (2013), he left Rostrum and signed with the major label Warner Bros. Records in 2014. With them, he released four studio albums: GO:OD AM (2015), The Divine Feminine (2016), Swimming (2018), and the posthumous Circles (2020). For Swimming, he was posthumously nominated for a Grammy Award for Best Rap Album. He also served as a record producer for various artists, including himself, under the pseudonym Larry Fisherman.

On September 2018, Miller died from an accidental drug overdose of cocaine, fentanyl, and alcohol at his home, aged 26.

The full biography can be viewed here

Malcolm James McCormick known professionally as Mac Miller. He was born to a Jewish mother and a Christian father. Miller was raised Jewish, had a Bar Mitzvah, and ...

The Broadway Musical: a Critical and Musical Survey

Second edition 1992 Explores and analises the significance of the music of American musicals such as Show Boat, Porgy and Bess, Kiss Me Kate, West Side Story, Fiddler on the Roof, Evita, A Chorus...

In this film Leonard Bernstein tells his story, from his early beginnings throughout his entire career. The film features rehearsals and performances of his...