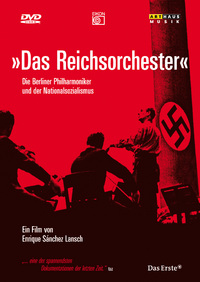 This film reveals the story of the Berlin Philharmonic Orchestra during the Third Reich as told by the musicians themselves rather than through the history books. Through interviews with surviving musicians, their family members, and archival footage, Lansch recreates the realities that were forced upon the orchestra as it moved from being a private orchestra to a state orchestra. Because of the orchestra's affiliation with the Nazi party it has long been considered a Nazi orchestra. This film paints a different picture as Hans Bastiann, concertmaster, and Erich Hartmann, double bass, and others talk about how there were very few true Nazi supporters within the orchestra. While some of the Nazi party members in the orchestra did not force their beliefs on other orchestra members, others made the simple task of playing music into a task riddled with suspicion and fear of being turned in for saying things to the wrong people. After the war the orchestra purged itself from its Nazi past as the first reunion concert was dedicated to works that were banned during the reign of the Third Reich. Furthermore, all members who were known as Nazi enthusiasts were either kicked out of the orchestra or had to go through a denazification process.

The film also discusses the Jewish members of the orchestra, specifically Joseph Schuster, 1st solo cellist, and Simon Goldberg, concertmaster, who were forced to leave by the mid 1930s because of the rising anti Semitism around them. Both of them went on to have prosperous musical careers abroad, and Schuster, decades after the war, even went back to Europe in order to play again with the orchestra.

Excerpt from the Film:

This film reveals the story of the Berlin Philharmonic Orchestra during the Third Reich as told by the musicians themselves rather than through the...

Documentary. Leonard Bernstein and Isaac Stern come to Jerusalem just after the Six-Day-War to give a special concert in the Mt. Scopus amphitheater

Otto Klemperer was one of the morst prominent conductors of the Twentieth Century and was active for a large part og the century, from its early years as a...