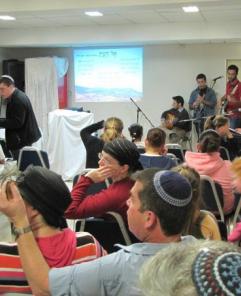 * This entry is a summarized version of the full artice about communal singing, by Talila Eliram. To read the full article, see below.

Communal singing (or public singing,) is a tradition that began in the Halutz movements in the Diaspora, while anticipating their immigration and settling in Palestine.[1] At the beginning or end of a social activity they would sing translated songs, songs that they knew from home songs of pining for the Land of Israel. In addition to those mentioned, they would also learn new songs, taught to them by envoys who returned from the Land of Israel. These communal singing events were continued by the Halutzim in Palestine, who, while training and building Kibbutzim, would gather at the end of a day's work to sing communally. As the years passed, this musical activity reached the cities, and communal singingbecame one of the defining characteristics of the Israeli society. In homogenous groups (such as those of the Kibbuzim), communal singing was spontaneous, and the participants could sing without the help of an instructor or leader. When the participants became more heterogeneous, especially after the fourth and fifth Aliyot [1924-1939] (Jewish immigrations to Palestine), specifically in large cities, the job of the communal singing instructor was created. At this point, communal singing was no longer spontaneous, but rather, a semi-formal event (Hirshberg1995). This is how, for example, the communal singing gatherings at Beit Brenner in Tel-aviv, instructed by the composer Daniel Sambursky, or, at the end of the Oneg Shabbat gatherings, also in Tel-Aviv, instructed by Menashe Revinah (Rabinowitz), developed.

Spontaneous communal singing continued with the youth movements, and from there it reached the Palmah[2]and the gatherings around the campfire. In the past twenty years, communal singing gatherings with an instructor, usually accompanied by a guitar or an accordion, gained a second wind and returned to be a social activity that is unique and distinctive of Israeli society. This is partly because of the national security situation during the beginning of the second intifada, during the years 2000-2002. During these years, there were many terror attacks against civilians, and many lives were lost. This brought the need for a feeling of social "togetherness," a feeling that was somewhat answered for through communal singing gatherings. Effi Netzer ascertains that "the communal singing phenomenon is an Israeli phenomenon. There is no other place in the world where people come and pay money just to sing in public. It simply does not exist."

Hence, it can be seen that communal singing is an accepted social activity in Israel. Its format usually consists of an audience who sings with the communal singing instructor as the lyrics are either projected from slides onto a screen, or printed out and handed to the audience at the entrance to the auditorium. Occasionally, there will be an additional part to the event, where a singer will get on stage and perform a few songs, or sometimes, a singing troupe will perform a variety of popular songs.

[1] This text is a summary of a full article by Talila Eliram, written for the JMRC.

[2] An early Jewish-Zionist commando unit in Palestine that existed until the establishment of the state of Israel in 1948, which became an important part of the Israeli culture and history.

* This entry is a summarized version of the full artice about communal singing, by Talila Eliram. To read the full article, see below.

A Critic Look at His generation

Following the foundation of the State of Israel in 1948 one can clearly detect a growing response to world-wide artistic expressions. The new modes of expression, the innovative techniques, the...