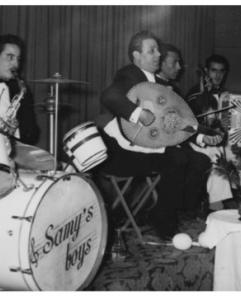 With the rise of Islam and the expanding Arab conquests throughout the Middle East, North Africa and Spain, the vast majority of the Jews of Antiquity found themselves living in lands where Arab culture and language predominated over all local traditions. Jews of these lands absorbed, integrated with and contributed to Arab culture, a process that continued well into the twentieth century. This process ended, at least in the intensity that characterized it throughout history, with the rise of the modern national/ethno-religious conflicts in the Middle East that followed the fall of the Ottoman Empire and European colonialism.

Music and music making was one area of cultural expression in which the Jewish-Arab encounter was intense. Shared musical spaces between Arabs and Jews is becoming a subject of growing interest in diverse scholarly fields. The JMRC has addressed this subject selectively in the past.  Now, within our website, we open a new project page to consolidate within it studies that highlight different aspects of the musical lives of Jews in/from Arab countries, the sociocultural milieus in which they came to life and encounters between Arab and Jewish musicians from Morocco to Iraq. The project also features studies addressing how Arab musical genres, modal frameworks and rhythms influenced the music of Jewish communities throughout this vast geographical space. Finally, the project page includes critical assessments of existing historical works, as well as new enterprises.