The Idelsohn Project: A Work in Progress and an Open Archive 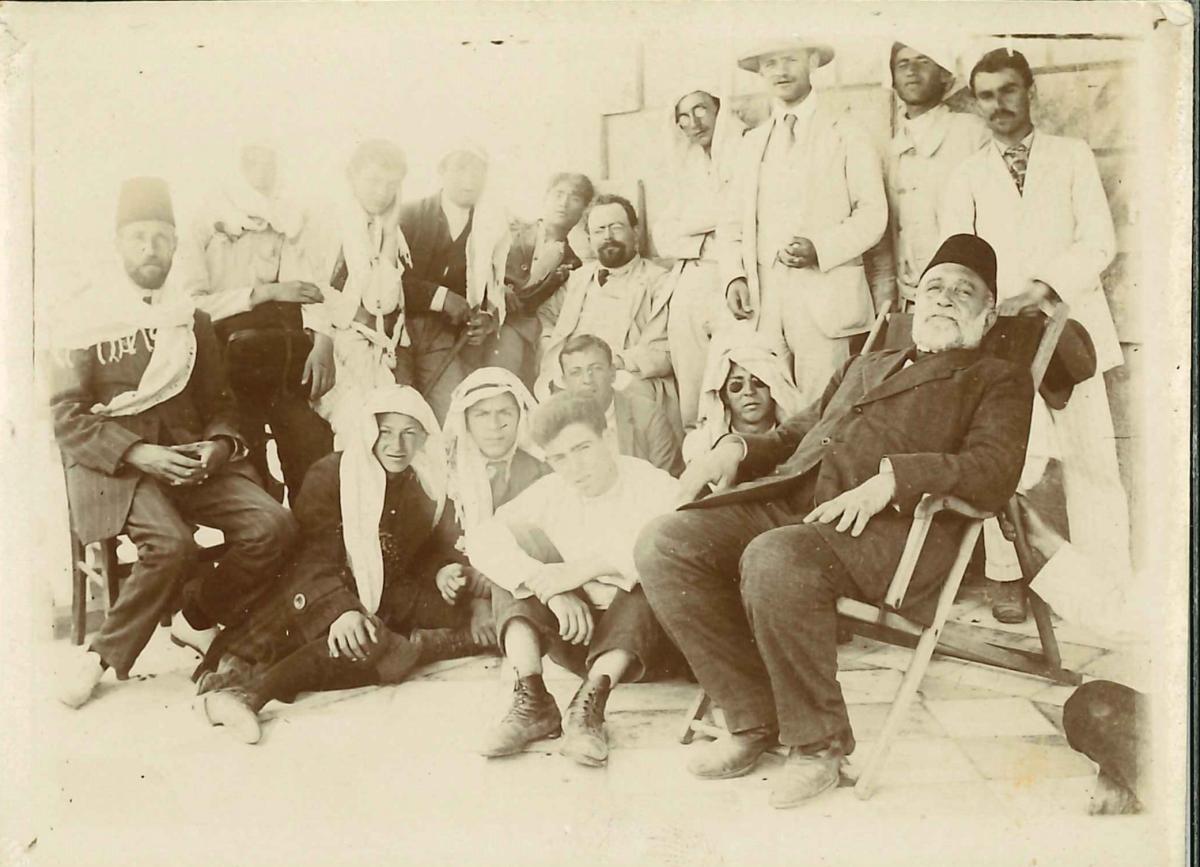 A.Z. Idelsohn in Jerusalem, center with glasses. Surrounding him are likely some of his musical informants. David Yellin is seated in the foreground. Exact date of photograph unknown

Is music intrinsically political? The best-known Jewish song in the world is “Hava Nagila” (“Come, let us rejoice”). This Hebrew ode to happiness surfaces without fail at weddings and bar mitzvahs across the globe as a symbol of unalloyed joy. Yet few are aware it was written as a Zionist song with political overtones in Jerusalem in 1918. Its "composer" (i.e. the promoter of a new text set to an existing Hassidic niggun) Abraham Zvi Idelsohn, was a European-born Jewish musician who insisted that music and affect were inseparable from ethnic nationhood. Like his other creations, “Hava Nagila” was consciously designed to conscript Jewish hearts into a Zionist political revolution. It emerged from his problematic racial theories about Jews and his ethnographic search for a primordial ur-sound that Zionism needed to recover to succeed in its political mission. Does this aural icon of Jewish happiness, then, retain a political undertone in our days? What is the link between music and nationalism in the modern Jewish imagination?

These queries form the core of the Idelsohn Project, which this section of the JMRC website will host from now on. In spite of a vast corpus of research on the oeuvre of the musicologist, composer, educator, and cantor, Abraham Zvi Idelsohn (1882-1938), his life is still uncharted territory. He has long been recognized as a path-breaking scholar of Jewish music and liturgy who influenced multiple generations of Jewish and Israeli composers, cantors, and scholars. Much of what continues to be taught uncritically as the history of Jewish music in schools, seminaries, synagogues, and universities derives directly from his major publications, notably Jewish Music in Its Historical Development (1929) and his monumental ten volumes titled Hebräisch-orientalischer Melodienschatz (1914-1932). Yet, in spite of this wealth of sources and the general public interest in Idelsohn, an encompassing critical and contextual evaluation of his complete biography and his ideas of sound, emotion, religion, and politics remain manifestly absent. The man who has been called “the father of Jewish music research,” and one of the earliest proponents of musical Hebrewism as the basis for the sonic renewal of modern Jewish nationhood, still remains an enigma.

This lacuna is unfortunate. Idelsohn’s musical nationalism presents an ideal case to further explore the construction of a number of key facets of Jewish modernity. These include the role of aesthetics in shaping Jewish global public emotions; the distinctive physiognomy of Jewish Orientalism and its ties to early Arab- Jewish sociopolitical and cultural encounters in Palestine during the late Ottoman period and the early years of the British Mandate; the transnational channels of dissemination and the reception of twentieth-century Jewish aural nationalism; the impact of World War I on the transformation of Jewish intellectual life, suspended between Europe and the Middle East; and the understudied topic of nationalist demobilization and the Jewish rejection of ideological politics in the twentieth century.

The elucidation of these and many other issues is the fundamental aim of the Idelsohn Project. Through an expanding accumulation of source materials, we hope to create a critical mass of data that will allow scholars from diverse disciplines to elaborate on Idelsohn’s figure, works, intellectual concerns and social networks. Materials will include biographical sources, selections of his own writings translated and commented, iconography, and sound recordings.

Most of our resources derive from the magnificent Idelsohn archive that his family graciously donated to the Jewish National and University Library, today the National Library of Israel in Jerusalem. It is catalogued as Mus. 4 at the Music Department of the NLI. Besides this major primary resource, we have benefited in recent years from materials located in other institutions, most notably the Cincinnati and New York library branches of the Hebrew Union College-Jewish Institute of Religion. In addition, the descendants of Idelsohn, mostly of the fourth generation who still have a vivid memory of their immediate ancestors, have been kindly collaborating with us in making available all the Idelsohniana that remained in South Africa, Idelsohn’s place of rest.

Although our final goal is the publication of a volume on Idelsohn’s life and contributions framed by the research questions exposed above, we would like to start sharing our source materials with the public at large at this early stage of our investigation. It is our hope that this collaborative scholarly enterprise will create a new paradigm in research methods based on an open source approach. The public is invited to collaborate with us and we are open to answering queries from the public.

This document aligns different events in Idelsohn’s life as he related them in the different versions of his autobiography written in Hebrew, English and German with added selections from the oral memoire of Idelsohn’s younger daughter, Yiska, recorded in South Africa.

A Recovered Voice from the Past

The memoire of A. Z. Idelsohn's oldest daughter Shoshanah.

This comprehensive biography includes exerpts from his own writings.

This volume of the JMRC's academic journal Yuval was dedicated to Idelsohn on the occasion of his centennial. It features PDFs of individual articles for download.

Hava Nagila: From Idelsohn to Belafonte & Beyond

A slide-show created by the JMRC website on the Flikr platfmorm more than a decade ago with a myriad of information about Hava Nagila, including scans of Idelsohn's original scores. This feature was one of the triggers for Hava Nagila: The Movie

An article published in Tablet online magazine (September 2019) on the earliest known version of Hava Nagila.

Geshuri (1897 - 1977) was an important researcher and writer focused on Hassidic and Jewish music in Israel. This updated biography contains an appendix examining a series of letters he exchanged in the early 1930s with Idelsohn.